Long lost legendary slab of classic British industrial music, originally released in 1986 on the amazing Broken Flag label. The most noteworthy thing about Toll, besides it being a killer record, is the fact that it just so happens to feature a pre-Stereolab Tim Gane (!) as well as Paul Lemos from Controlled Bleeding. But Stereolab fans won’t necessarily dig this, Toll is grim stuff. Cold and harsh, lots of metallic percussion, looped rhythms, skipping records, bits of shortwave radio, disembodied voices, plenty of metal on metal clang, thick distorted drones, all held together by huge lurching basslines, that give the whole thing a definite depressive miserablist vibe, like a seriously industrial Joy Division.
At their most musical, like on the loping mantra like “Broken Frame”, they do sound quite a bit like the darkest of Factory bands, with simple plodding percussion, and hypnotic low end throbs, all beneath a dramatically crooned vocal line. Imagine any of the current crop of new wave revivalists, Interpol for example, slowed waaaaaaaaaaaaay down and wrapped in plenty of rumble and clang, and you’ll get an idea of the sound of Toll.
But that’s only one element of their sound, the other being much more abstract, epic, wide open expanses of industrial crunch and shimmering drone, mournful melodies drifting in and out of machinelike rhythms, and crumbling landscapes of sound, wheezing hisses and keening feedback, jagged shards of buzzing electronics, all sorts of strange vocals, dripping with reverb and delay, grinding whirs and thick moaning low end, very dark and dreary and very prescient of the whole modern Wolf Eyes and friends noise scene.
In addition to the entire Christ Knows LP, the cd includes 3 bonus tracks, two that sound like they could be lost Wire jams, all blown out and relentlessly throbbing, with wild squalls of feedback and buzzing guitars over bouncy bass lines and simple propulsive rhythms, while the other is an epic drone-y crawl, thick with layered voices, pulsing bass lines, muted percussive thumps and shuffles and tangled guitar scribbles, all swirled into a dense cloud of slow shifting sound. So awesome.
Fans of old school industrial (Throbbing Gristle, Suicide, Nurse With Wound), classic post punk / new wave (Wire, Joy Division, the recently reviewed Arkansaw Man, etc) as well as mode modern outfits like Skullflower, Wolf Eyes, Dead C and the like, will seriously dig! 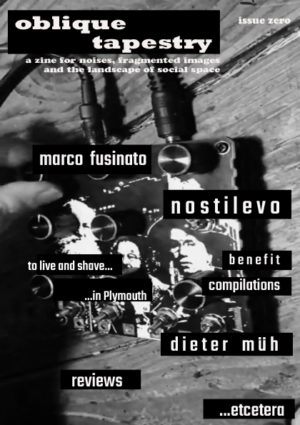